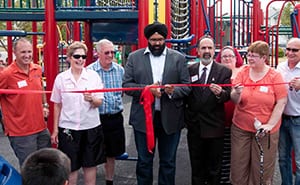 The kids love it.

Countless families and hundreds in total showed up for the grand opening of the Applewood Park Accessible Playground in Applewood Park, on Labour Day, Sept. 2nd, and the park was very well-received by families and children alike.

Alderman Andre Chabot and MLA Manmeet Bhullar attended the ribbon cutting, along with Tim Aylesworth of Park N Play Design, who helped design the park with the guidance of Lynn Warkentin, treasurer of the Applewood Park Community Association (APCA), and her husband Frank Warkentin.

“He had a really good handle of what we wanted in our park, and he went above and beyond the call of duty. He has been so, so good to work with, and it’s just a super company.”

She noted that Aylesworth went to a convention highlighting some new and exciting playground equipment, and came back to her saying that there were a few pieces that he was sure they would want in the new park – three of which ended up being installed.

The pieces, which are completely new to Canada, are the Net Tunnel, the Track Ride and the Internal Climber.

Through the help of many volunteers, as well as the hand of Manmeet Bhullar in securing grants from Alberta Culture, the park – valued at over $900,000 – became a reality.

Bhullar, who spoke to attendees before the ribbon-cutting, said “I’m so, so, so happy right now. Have you seen a park like this come up recently anywhere else in the city? No! This is beyond the Cadillac of all parks, and it’s happening right here in our own community…It’s a great community to live in, isn’t it?”

Although many adults pitched in their time and effort in getting the park done, he said it was all so the kids would have a top-of-the-line playground to enjoy for many years to come.

Andre Chabot, who pitched in through both mediation with city departments and some hands-on work, said he was “very happy to have contributed to it.”

He added that since the park is on City of Calgary land, although the city did not help fund the park directly, the city will be taking care of the maintenance and upkeep of the park going forward.

Birgit Reviczky, president of the APCA, said the idea for a handicap-accessible park came to her when she considered that many families who have handicapped children also have non-handicapped ones, and a park like this would appeal to everyone.

“It’s really neat…we did well,” said Reviczky. “I sold my idea to Lynn and she was able to see it the way I did.”

She said it’s great how everything just fell into place for the park, as the community received three Community Facility Enhancement Program (CFEP) grants totalling $375,000, with considerable assistance from MLA Manmeet Bhullar.

The rest of the money came through a variety of grants, and the APCA put in over 90 per cent of the remainder using money raised with casinos.

The Calgary Foundation, through the Neighbour Grants Program, contributed to the build week and the grand opening celebration.

There were many organizations and companies who helped out by providing volunteers, including Imperial Oil, PennWest Exploration, Arc Resources Ltd., and the City of Calgary Roads Department.

These companies donated 1,048 volunteer hours and provided 40 volunteers each day for the build week, which were valued at $15 per hour.

The Ladies from Abbeydale Christian Fellowship graciously prepared the muffins, snacks and lunches for the build week, the Mac’s on Applewood Drive and 68th Street pitched in with whatever was needed, and Co-op also provided gift certificates, which were put towards food and snacks for the build week volunteers.

Thanks to all those who came to celebrate the grand opening and a big thank you to all our supporters and volunteers. 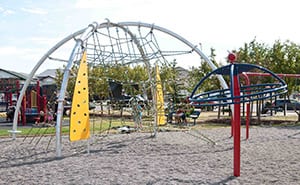 No items found.
Back to all projects